Autonomous cars are coming — ready or not — and pioneer Mercedes-Benz has included Australia on its world tour of the latest hands-off-the-wheel tech.

In the gradual automation of the car, the steps are small but significant.

Today, a car can steer itself for up to 60 seconds if the lane markings are clear and the road is straight or curves only slightly. Even then the tech can easily stumble, which is why the driver must always remain alert and in control. 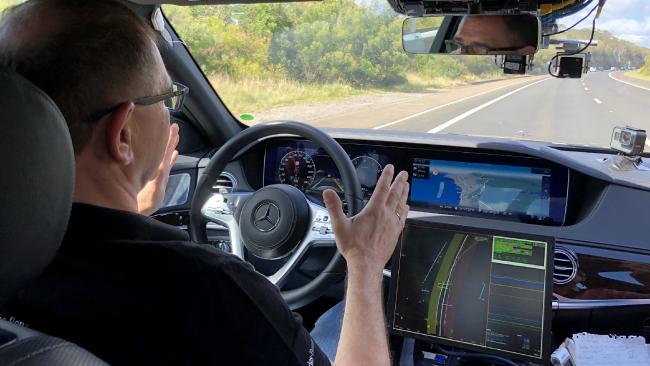 This is why there is such a misunderstanding about “autonomous” cars. The term loosely describes various levels of autonomy rather than complete hands-free driving.

The industry has defined levels one to five. The most advanced cars today are at level two.

However, consumers have bypassed feasibility and their expectations are at the end point — level five, cars that can fetch and deliver us and may not even have a steering wheel.

That won’t become a reality until well into the next decade. Fully autonomous cars will be used initially in designated precincts that have been mapped to the millimetre and they won’t be available for the public to buy.

Among the leaders in the autonomous car race, Mercedes this week took a test-bed S-Class from Sydney to Melbourne via Canberra. Its advanced cameras and radar can, in theory, allow unlimited hands-free driving on freeways. 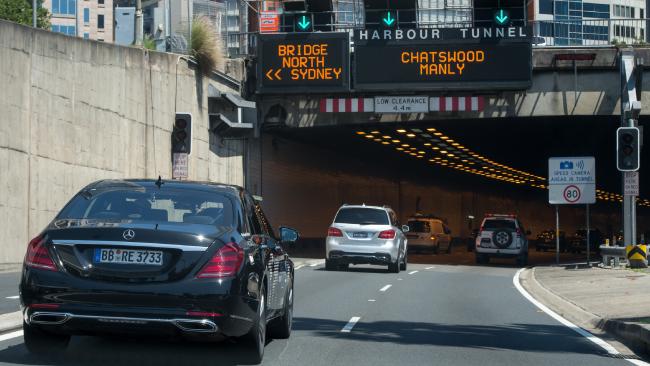 Mercedes is trying to get its cars to ‘learn’ Australia’s variable speed limit signs. Picture: Supplied.Source:Supplied

The test car is also equipped with a more advanced satellite-guided cruise control that applies the brakes and accelerator more aggressively on winding roads, so all the driver needs to do is steer.

It’s also fitted with LED headlights that each have 84 elements. They are not brighter but cast a more accurate beam, blanking out oncoming cars more precisely.

At night the Mercedes test car is able to project an image on the road ahead, such as a pedestrian crossing, to let others know it’s safe to cross and the driver is prepared to wait.

Engineers are even experimenting with projecting a “hook turn” symbol specifically for Melbourne, to let other traffic know the car is waiting to perform a turn across tram lines once the signal turns green. The Mercedes projects a ‘hook turn’ symbol on the road to alert other cars of its intention. Picture: Supplied.Source:Supplied

“We are in Australia because it has unique roads and unique traffic situations and we want to be ready for every possibility,” says Mercedes autonomous driving tech boss Jochen Haab.

“In the future there may not be a steering wheel but that is some way off. For now the driver must be in control but we are working on ways to give the driver extra assistance.”

As advances in technology outpace governments’ ability to draft legislation to accommodate them, policy makers are right to proceed with caution. On personal observations so far, the autonomous technology is far from infallible.

NRMA director Tim Trumper says there are “about 700 laws that need to change ... It’s solvable but it’s complex. At some point the trust issue will be solved because we just get used to the idea but we’re a long way from that.”

The latest Mercedes test car not only is a glimpse into what is possible in the near future but also underlines just how far we have to go. 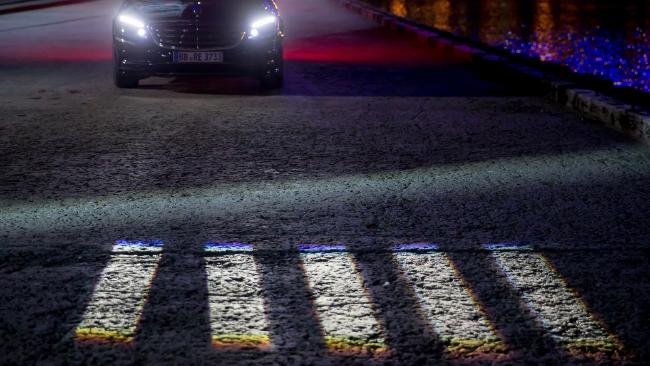 The experimental Mercedes can also project a temporary crossing onto the road, to let pedestrians know the car is prepared to wait for them to cross safely. Picture: Supplied.Source:Supplied

Are we there yet?

The first form of “autonomy”, it could be argued, was old-fashioned cruise control introduced decades ago: the car able to maintain its speed without the driver touching the accelerator pedal.

Need to overtake or yield the lane? Tap the brake pedal or press “cancel” on the cruise control button.

Fast forward to today and radar cruise control maintains a gap with the car ahead, even as it changes speeds, and brings the car to a complete stop in traffic, moving off again with the green light.

Combine that technology with the ability of cameras to detect lane markings and the advent of electric power steering and — when visibility and conditions permit — the car can now steer itself within a lane on a straight road or gentle curve.

Even more impressive, there are now cars that can change lanes on a freeway to pass a slower vehicle — after the driver has indicated and the onboard radar has detected that the adjacent lane is empty.

Next step: the tech will overtake automatically on the freeway and activate the blinkers itself. This reporter is on Twitter: @JoshuaDowling