By An Limin and Fran Wang 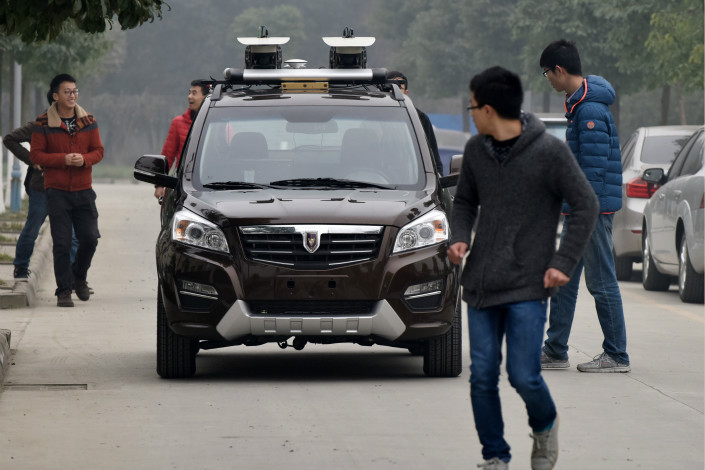 Under draft regulations, driverless cars will have to clock up to 5,000 kilometers of test driving in closed environments before being let loose on China's roads. Photo: Visual China

(Beijing) – The government is considering giving the green light to driverless car companies to conduct tests on public roadways, a move that is expected to help ambitious Chinese firms pull ahead in autonomous driving.

The Ministry of Industry and Information Technology (MIIT), the Ministry of Public Security and the Ministry of Transport are working on the draft regulations, and a source close to the MIIT told Caixin that an outline of road testing rules for unmanned vehicles has been completed.

The regulators are considering issuing licenses to qualified car manufacturers, auto parts makers, internet companies, universities and other applicants, the source said. In order to qualify for road testing, a vehicle must have already been test-driven for at least 5,000 kilometers (3,100 miles) in a closed environment and, it must pass an assessment by a third-party technology institution authorized by the government, among other conditions.

Driverless cars are banned from public roadways under China’s existing laws. A July video of Robin Li, chief executive officer of Chinese internet giant Baidu, testing an autonomous vehicle on Beijing’s Fifth Ring Road — with his hands off the wheel — set off a debate about whether the excursion was legal.

If China allows road testing of unmanned cars soon, Chinese companies could get a head start in an industry already teeming with foreign competitors, a senior manager of a self-driving system start-up, who declined to be named, told Caixin.

The U.S. House of Representatives earlier this month approved a bill that, if passed by the Senate, would allow manufacturers to introduce as many as 100,000 autonomous vehicles per year without having to meet existing auto safety standards.

Sources that participated in the discussion about China’s planned road test rules said there is no timetable for the introduction of the regulation, because regulators have to go through complex procedures to revise existing laws that conflict with the new guidelines.

Road testing is crucial to the development of self-driving technology because computers must become familiar with a variety of road conditions, to improve their “sensing” and “decision-making” programs – two of the three key aspects of the autonomous driving technology that also include “execution.”

Google has estimated that a computer needs to “drive” for 1 billion miles to become sufficiently familiar with most road conditions. The U.S. search engine’s autonomous cars had run for three million miles by May, the highest self-driving mileage in the world.

Chinese companies are keen to ride the international autonomous driving wave for new growth. Baidu announced last month a plan to roll out a partially self-driving car by the second half of 2019, in partnership with a state-owned car maker. Tencent, the Shenzhen-headquartered owner of popular messaging app WeChat, has agreed to collaborate with Shanghai International Automobile City on autonomous driving, high-definition mapping and setting industry standards for smart cars.