Mary Gustanski calls this an inflection point for the automotive industry as it faces a sea change brought on by the development of autonomous driving, electrification and connected vehicle technologies.

“It’s a point in time that we’ve all waited for for years where everything that we’ve said is going to happen tomorrow, well, I think we’re at the turning point where you’re going to see it start happening,” said Gustanski, who is the chief technology officer for Delphi Technologies.

That turning point means new pressures for automakers and suppliers, who want to pursue the potential of an uncertain future even as they are tied to a profitable past. The list of companies trying to define and profit from that future goes far beyond traditional automakers and suppliers to include technology companies such as Apple, Waymo, Microsoft, Uber and scores of others.

Count Gustanski’s company among those adjusting to this changing world. Delphi Technologies was officially spun off this month from Delphi Automotive into a stand-alone entity focused on vehicle propulsion and electrification, the former parts division of General Motors. What remains of the former Delphi Automotive is called Aptiv and will focus instead on self-driving and connected vehicle development.

“Both paths are necessary and very different, and we believe there is going to be a time in the future where it was going to limit one company or the other, and it would probably be” what is now Delphi Technologies rather than Aptiv, said Gustanski.

Michelle Krebs, an analyst for Autotrader, said the split could appeal to investors, who view companies such as Tesla, for instance, differently than legacy automotive-related companies such as Ford. She noted that many Silicon Valley companies that are considered successful are not profitable, but profit is not necessarily the main focus when companies are developing new technologies.

“It looks to me like they want to divide the business into the now and the future,” she said of what had been Delphi Automotive. “We all know that autonomous, electric and connected is coming,” even if it’s unclear how or when.

Krebs pointed to the uncertainty, however.

“When does the payoff come, if ever? There’s a lot of questions there,” she said.

To be sure, Gustanksi and others associated with Delphi Technologies see a bright future for their business as the company is called upon to help automakers deal with regulatory pressures, especially in Europe and China, to accelerate vehicle electrification. For Delphi Technologies, that means providing options for companies, from pairing internal combustion engines with hybrid technologies that increase efficiency to powertrains for fully electric vehicles.

Gustanski, who had been vice president of engineering and program management at Delphi Automotive, said her new company will collaborate rather than compete with Aptiv as it races forward with autonomous and connected vehicle development. In fact, both companies, which have headquarters in the United Kingdom, will continue to occupy offices in the same complex in Troy, north of Detroit. Aptiv, with 147,000 employees, has a market capitalization — the number of shares outstanding times the current stock price — of more than $22 billion; Delphi Technologies, with more than 20,000 employees, has a market cap of $4.4 billion.

For Aptiv, the path forward covers a wide area as its engineers try to streamline vehicle architecture to focus on software rather than hardware. The company plans to add 5,000 to 6,000 employees globally as it pushes toward deployment of autonomous and connected vehicles. 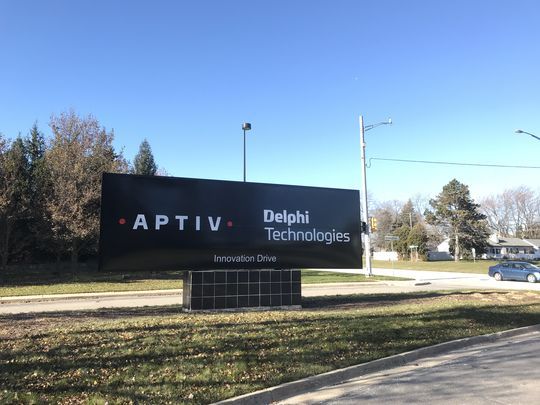 A sign in Troy displays the names of both Aptiv and Delphi Technologies. Aptiv is the name of the auto supplier formerly known as Delphi Automotive. Delphi Technologies has been spun off as a separate company focused on vehicle propulsion. (Photo: Eric D. Lawrence/Detroit Free Press)

In an introductory commercial, a narrator lays out Aptiv’s ambitious goals:

“Meet Aptiv, the technology company that’s moving mobility forward; designing, engineering and enabling solutions for how we’ll move tomorrow; bringing connectivity, smart cities and autonomous vehicles to life in ways only we can. We’re writing the software, building the hardware and connecting it all together and making it work … creating a world where everything will talk to everything — cars to roads, roads to drivers, drivers to computers.”

And the company has wasted no time making news. Shortly after the split, Aptiv announced that it had opened a technology center in Boston, to join its locations in Pittsburgh and Mountain View, Calif., “focused on automated mobility-on-demand (AMoD) and data management development.“ In recent months, Aptiv, as Delphi Automotive, also gained a partnership with the ride-hailing service Lyft when it acquired Cambridge, Mass.-based autonomous driving software developer nuTonomy for $450 million.

Glen De Vos, the chief technology officer at Aptiv, described a variety of factors that have pushed not just a rebranding, but a “reformulation” of a company formerly focused on selling components to automakers.