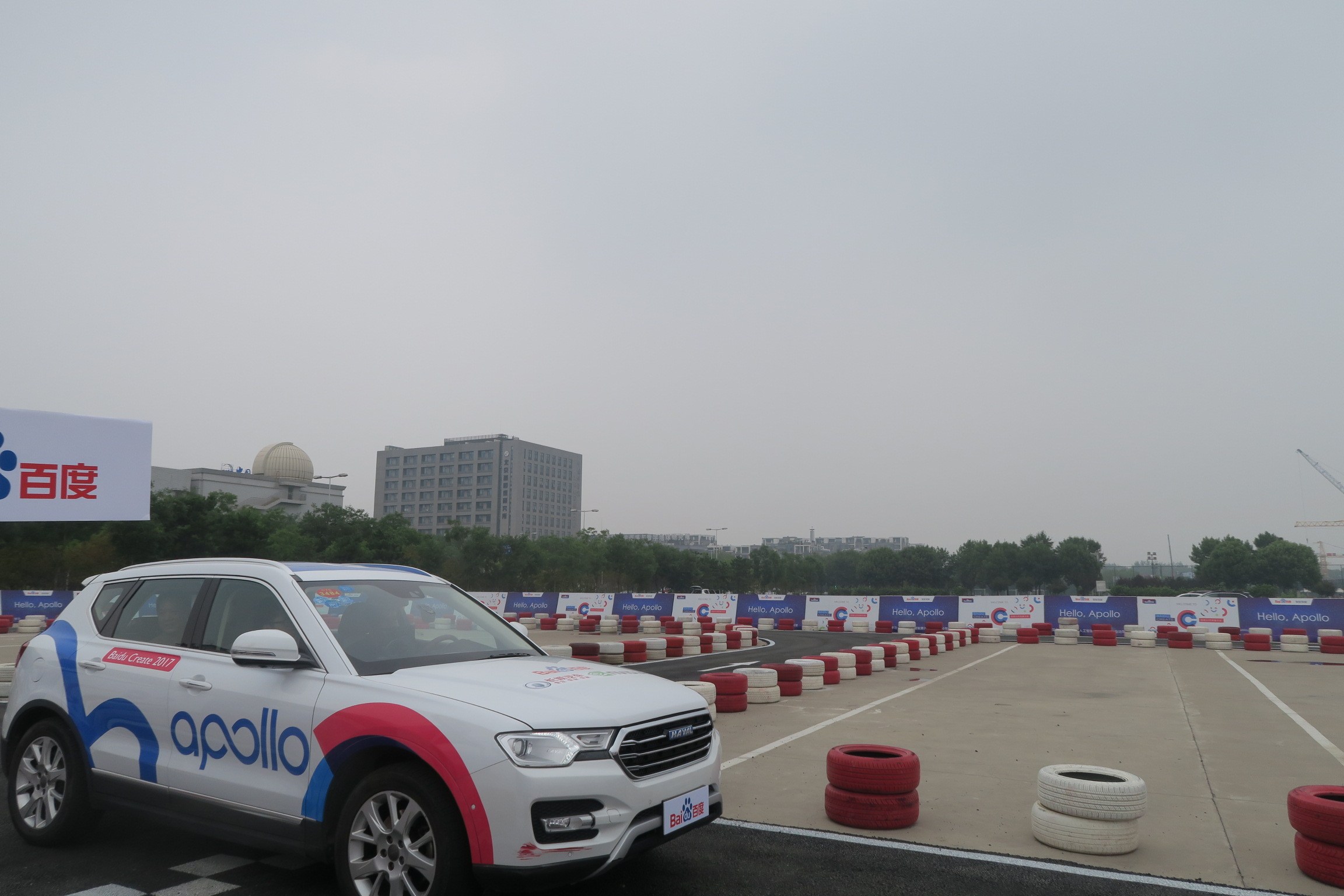 One ofBaidu’s test cars at an AI conference / Photo credit: Tech in Asia

Faced with regulatory hurdles at home, Chinese companies have headed en masse to California to conduct road tests for driverless vehicles. According to data released by the California Department of Motor Vehicles, 12 of the 50 firms seeking permission to conduct such tests are from China or have a Chinese founder. Chinese transportation startups JingChi, TuSimple, California based-Pony.ai, and others are all testing self-driving cars in California.

Yet many, including Baidu co-founder Robin Li and Sinovation Ventures’ Dr. Kai-Fu Lee, suggest China could win the self-driving race due to a preferential regulatory environment.

China identified autonomous cars as one of the key sectors in its “Made in China 2025” program to transform the country into a world leader in innovation. But Beijing only became the first Chinese city to allow autonomous vehicle road tests in December 2017. The city’s autonomous driving guidelines allow entities registered in China to test five vehicles simultaneously after completing tests in designated closed zones.

In late January 2018, China completed the first draft of its national rules for driverless vehicle road testing, including city-planning elements that are crucial to testing autonomous vehicles. Apart from detailing the testing requirements for drivers, cars, and companies, the regulations seek to identify suitable road sections for tests and how roads should be reconstructed to offer a better testing environment—at least at the early stages.

So why test in the US?

Chinese firms are going global to utilize R&D talent bases in the US, Singapore, and elsewhere. Chinese AI firms are increasingly connected to the global AI ecosystem and are firmly embedded within a global entrepreneurial, financial, and supply chain web.

Chinese giants like Baidu, for example, have AI R&D bases in the US. Processing chips used for high-end Chinese AI are often sourced from the US, as Nvidia is the major GPU processing chip supplier for AI globally. US venture capital permeates top Chinese AI startups, such as 4Paradigm, SenseTime, and Mobvoi.

Open source collaboration is also a key to technical breakthroughs in the autonomous vehicle space. Google’s open source platform for machine learning, TensorFlow, for example, was released in November 2015. Baidu also unveiled project Apollo, an open source self-driving platform for its partners, in July 2017. Apollo now has almost 90 member companies on board including global partners Ford, Daimler, Intel, Microsoft, Nvidia, and others.

According to China’s Xinhua News Agency, this is not a “global tech cold war” between China and the US on AI. “Artificial intelligence involves progressive learning that requires a continuous flow of AI-ready data,” the March 1 article reads. “It is open sourced and will become stronger with more players.”

Why China can win: techno-utilitarianism

China made the development of AI a national strategy in July 2017 and has recruited Tencent, Alibaba, iFlyTek, and Baidu to an “AI national team,” each focusing on specific fields of AI. However, while determined private entrepreneurs have led the development, they benefit from favorable regulations. Once a centrally-planned agenda is set in Beijing, people, startups, and capital follow, historically creating industry bubbles.

For AI, this will be a boon because industries like building semiconductors require top-down support, and the biggest impediment to self-driving cars will likely be the regulators and public consensus rather than the technology itself.

I like to refer to China’s legal system as “law in a petri dish.” This began in 1979 with China’s Special Economic Zones, the most famous being Shenzhen. But local pilot programs have now become the norm for testing innovative policies in China and are exceptionally helpful today for the development of AI.

An AI-expert-turned-VC, Dr. Lee has described China’s regulatory system as “techno-utilitarianism.” In short, “Let’s launch the tech. If there’s a problem, fix it.” At his Oxford Union address on February 19, Dr. Lee explained his thoughts lucidly:

“China has a techno-utilitarian approach that basically says, ‘Let’s get the product out there, iterate, collect data, fix things when they break, be very fast iterating, and be willing to change the laws when things are proven some other way.’ And again, neither one is right or wrong [UK vs China], but in terms of making AI progress, I think analysis paralysis will be the problem. [This is] the Western world’s biggest danger to fall behind in the technology competition.”

An example of this is Chinese startup Uisee (驭势科技), which began testing self-driving cars in airports for cargo and luggage at slow speeds and away from crowds. From its inception, Uisee was commercially focused with the Chinese government as its first client.

The Uber-style model is not the only application for self-driving cars. There will be many applications: delivery, transport, shuttles on campuses, car-sharing, trams, electric buses, trolleys, “Jitneys” (on the US East Coast), and as a solutions to the last mile to home from public transport. Thus, startups like Uisee stand a chance in finding their niche despite not having as much data as big tech companies.

According to self-driving car expert Anand Shah of the Albright Stonebridge Group, autonomous mobility requires immense amounts of policy support because archaic laws on town planning issues are currently in place. “Mobility innovation requires State initiative.” he says. “The US has been hands-off about it; Europe has been stalling. China is more calculated in wrapping their head around it, so we can’t count China out.”

Shah also notes that a coordinated agenda between the State and the private sector are important when it comes to autonomous vehicles. “In the US, the private sector is driving the agenda,” he says. “China will play king because the Chinese can decipher what the government will do behind closed doors.”

For example, the Chinese government heavily consulted with the private tech sector when writing the country’s July 2017 AI plan. This week, most debutant advisors representing the business sector for the Chinese People’s Political Consultative Conference were tech tycoons, including: Richard Liu Qiangdong (founder of ecommerce giant JD.com) and Neil Shen (a founding partner at the China arm of famed US venture capital firm Sequoia Capital).

Techno-utilitarianism may be the main reason China wins the holy grail of AI races.

But what about data laws?

One issue remains: China’s unclear cybersecurity law that may limit data exits from China. The law was drafted before globalized open source programs like Apollo were envisaged. I understand most of Baidu’s data for Apollo is in Northern California, Pittsburg, and Arizona. Car companies are testing the open source platform with cars in different weather and geographic conditions and sharing data globally. Baidu’s competitive advantage is global collaboration through Apollo.

As Chinese tech giants Alibaba, Baidu, Didi Chuxing, and Tencent began opening AI R&D facilities in the US and elsewhere in 2017, data localization under the law became increasingly problematic for the Chinese industry.

China’s ecosystem is part of a global technology system even if some protectionist features remain. This contradiction cannot last indefinitely, and China’s AI drive will likely lead the government to soften the cybersecurity law so that techno-utilitarianism can reign.